The  conflict in Cameroon pitting the English-speaking people of former British Southern Cameroon and the French-speaking Cameroon or La Republique du Cameroun is in its second year. The atrocities committed mostly by the central government based in Yaoundé, have seen minimal scrutiny like other conflicts in Africa for several reasons: Firstly, the government of 86-year-old Paul Biya has punitively restricted both national and international media from venturing to report the atrocities. Secondly, the government has embarked on an aggressive global misinformation and lobbying campaign, even when the evidences are overwhelming. This began with doling out golden statues to some influential global leaders like the UN Secretary General Antonio Guterres (Click here), Commonwealth Secretary General Patricia Scotland (click here), worth about $4 million. This partially explains  why these leaders have been mum on the atrocities committed by the French-speaking government. Thirdly, the West has put up no concrete action to force the regime of one of Africa’s oldest dictators to engage in concrete dialogue to seek solutions that respect the historical origin of this conflict. The absence of this global pressure has allowed the government of La Republique du Cameroun, to carry out mass Atrocity Crimes   – Crimes Against Humanity, War Crimes and Genocide. The International Criminal Court defines these crimes as follows:

Crimes Against Humanity: A serious criminal act committed within the context of a “widespread and systematic attack directed against a civilian population”. A crime against humanity can occur during war or peace, and can include murder, rape, slavery, persecution, extermination, and torture.

War Crimes: Serious criminal acts committed within the context of an “armed conflict”: a resort to armed force between states. They can also be committed in a civil war. The criminal act must be related to the armed conflict, so a murder or a theft during a war but unrelated to the war is not a “war crime”. A war crime can be many different things, from illegal seizure of property to attacking civilian objects to using prohibited gases.

Genocide: Act committed with the intent to destroy in whole or in part a national, ethnic, racial, or religious group. It can include killing or causing serious bodily or mental harm to members of the group. It can also include deliberately inflicting on the group conditions of life calculated to bring about its physical destruction, or imposing measures to prevent births. Genocide can happen during war or peace

The global powers have shied away from the word Genocide for fear of the implications – intervention (militarily). The U.S Ambassador to Cameroon, Henry Balerin, as the sole diplomat horrified by the atrocities has attempted to walk this fine line by describing it as “targeted killings of anglophones” (Click here). These “targeted killings” are evident in the killings and burning mostly in rural areas in English-speaking Cameroon, where the French-Speaking population is unlikely to be present. However, there are overwhelming evidence of genocide. These incorporates asking  entire villages to leave or be exterminated, calling English-speaking people dogs or terrorists (Click here), scorching entire communities (Click here),killing of innocent civilians (and justifying their extermination with fake Dane guns), mass raping (Click here) and purposeful humiliation like asking citizens to swim in mud, (Click here)among others.

These crimes have largely been under-reported by organizations that governments around the world depend on for informed decisions such as Amnesty International, Human Rights Watch, International Crisis Group, Genocide Watch among others. These organizations that are still to independently and thoroughly investigate these killings continue to use fake figures from the government of Cameroun that has no credibility in the eyes of its own subjects, talk less of the global community. Despite social media evidence of these crimes, the continuous use of these fake figures have helped to an extent to reduce the conflict to a courtyard feud of two kids, thus providing cover for the continuous extermination of the English-speaking population with no remorse. Bold face lies of recent by the French-speaking Cameroun government include denial of its soldiers executing innocent women and children in the Northern part of the country (BBC, Click here), denial of killings of men-of-God among others.

The failure of the global community to institute any kind of punishment on the government of Cameroun for such Atrocity Crimes, backed by credible evidence from organizations like Amnesty International (Click here) emboldened the Biya regime. The regime also snubbed all “lame” calls from some global organizations for inclusive dialogue by accelerating the crimes with impunity, with more killings, burning and arrests of innocent civilians in the anglophone regions. To show the West’s laissez-fair attitude to these Atrocity Crimes, the country was elected as a permanent member of the UN Human Rights Council, in October 2018.  The decision prompted late Greek blogger, Kostas Lanaras, to tweet that the

“admission of Cameroun into the UNHRC, makes it palatable to posthumously award Adolf Hitler the Nobel Peace Prize, for his crimes including annihilating more than 6 million Jews“.

While the bucks stopped with Hitler at the time, there is no doubt that the mass killings were carried out by his collaborators, some of whom disobeyed and fled the country and others who paid with their lives. Such was the case of Franz Jagerstatter, a German/Austrian Soldier, who called himself a “conscientious objector”. He refused to obey Hitler, claiming he wouldn’t fight for evil. He paid with his life. Others included former German Chancellor, Willy Brant (1913-1993), who had to flee Germany twice because of his opposition to Hitler.Since the start of the war on English Cameroon, declared by French Cameroun President Paul Biya, his two appointed French-speaking governors to the two British-Cameroon or Anglophone regions have obeyed all the extermination orders from the octogenarian.

Alarmed by these excesses, and the continuous wrong facts by organizations such as HRW, Amnesty International, International Crisis Group and the Western Media, on the casualty figures, this news organization decided to publish some of these Atrocity Crimes on the people of the former British Southern Cameroon.Today, with videos and human witnesses, I can boldly provide a concrete evidential window to some of these Atrocity Crimes committed on the people of the former British Southern Cameroon, who unlike Togo, Tanzania, Rwanda, Burundi, and others – all UN Trust territories was refused the right to full independence in 1961. This first publication in this series provides a conservative estimate of the numbers killed in the North West part of English-speaking Cameroon, since the month of May 2018. On this sad day, May 25th, 2018, French-Cameroun soldiers under the supervision of the Governor of the region – Mr. Adolphe Lele Afrique, massacred more than 35 innocent civilians in their sleep in a little village of Santa (Pinyin) (Click here). The lone survivor was later whisked off from his hospital bed in Akum, a neighboring village with his two brothers and executed by the same armies under the directives of Biya’s appointed French-speaking henchman and Governor of the region, Mr. Adolphe Lele Afrique. This act according to Cameroon’s opposition leader John Fru Ndi (Click here), was to conceal any evidence of the planned executions.

With no consequences for this action and previous ones, Mr. Adolphe was unshackled – more villages were burnt, more mass killings, raping till date. Since then, a conservative estimate indicates Mr. Adolphe Lele Afrique alone has supervised the killing of more than 2600 innocent civilians, more than 100 villages scorched, and more than 200,000 people rendered homeless in the region alone. Global silence has been deafening, with some wishy-washy calls for an end to the violence. This has had no effect on Biya’s henchmen like Adolphe Lele Afrique, whose professional promotion hinges on how much killings and misery they can perpetuate on the vulnerable English-speaking minority, whose disdain for the French-speaking leaders is palpable.

The aim of these publications is thus:

1. To galvanize the global community to stop this genocide, and to immediately hold the perpetrators like the two governors to the anglophone regions accountable, instead of enabling words like: “We are monitoring”, “both sides”, “we have called on”, “We are hoping”, “both sides must ….” These diplomatic excuses have allowed the 86-year-old dictator – Paul Biya, and his appointed henchmen to kill with pride, arrogance and impunity innocent people in the anglophone regions.

2. To provide a base for governments and organizations such as Amnesty International, Human Rights Watch, International Crisis Group, Genocide Watch, Freedom House, the global media and other organizations to take this crisis seriously, by getting the facts right, and to press for an independent investigation of these crimes, which the Biya government has vehemently opposed.

3. To beckon the above organizations to re-align their casualty figures to reflect the pain of families that have lost loved ones in the conflict.

4. To demand of western governments to re-examine their relations with any government that commits such Atrocity Crimes on its subjects, and lastly

5. To appeal to the International Court of Justice (ICC) to immediately initiate an investigation on the crimes so far committed by the French-speaking Cameroun Government on the minority English-Speaking people of the former British Southern Cameroon. It makes sense for the ICC to not only warn impending crime perpetrators in the D.R.C, but to prosecute those that have been and still being committed.

The conflict it should be recalled began as a peaceful demonstration in November 2016, but degenerated into a civil war, following brutal crackdown by the government of Paul Biya, who has been in power for 37 years. English-speaking authoritis have put the numbers so far killed at more than 7800. Close to 200 villages have also been destroyed by the French-speaking Cameroun armies, which today are called “occupying forces” by the population of the English-speaking regions. Also, there are more than 450,000 internally displaced people (Click here), and more than 50,000 refugees in Nigeria. The solution according to people of the region remains a referendum (Click here) like BREXIT or SCOTXIT, for the people of this once autonomous region to decide whether they want to stay with French-Cameroun or return to their self-governing status as it existed between 1953-1961.

Below are some images of about 2500 innocent civilians so far  massacred by Mr. Adolf Lele Afrique in the North West Region of British Cameroon, Since May 2018. The killings started on November 2016, and intensified following the declaration of war on the minority English-speaking people of British Southern Cameroon, or Ambazonia by Paul Biya, Again, this is the first in the series that will proceed also to look at the same massacres in the Southern Zone of English-Speaking Cameroon, where more than 100 villages have been burnt as well. An independent investigation is urgently needed to get the actual casualty figures. Again these are this organizations personal findings. 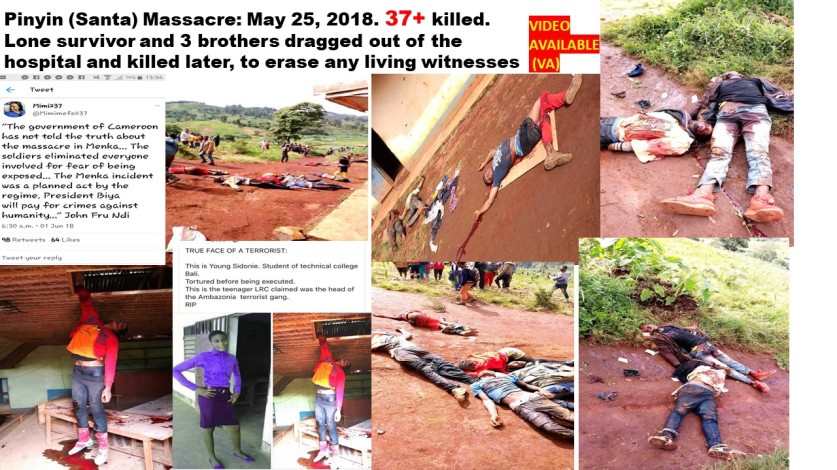 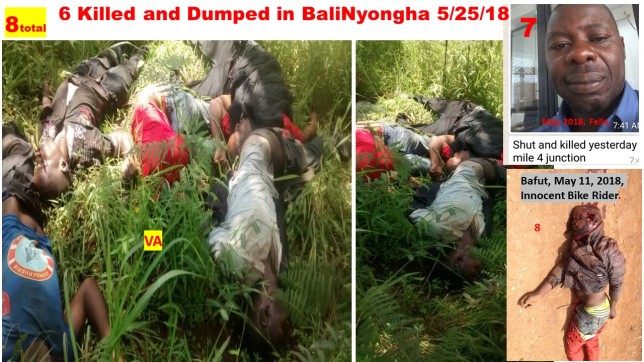 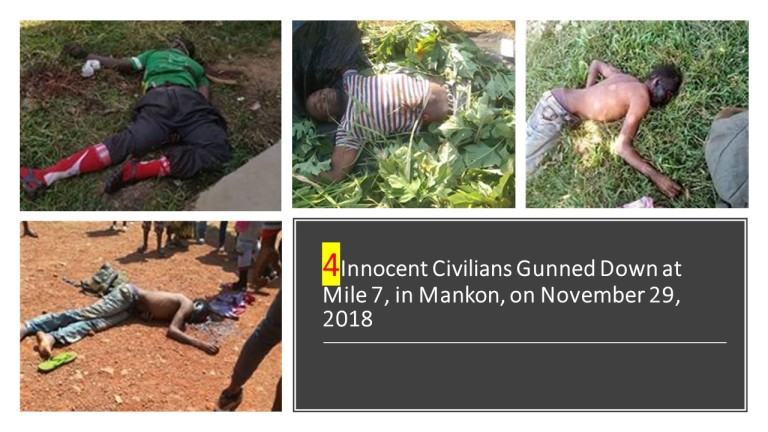 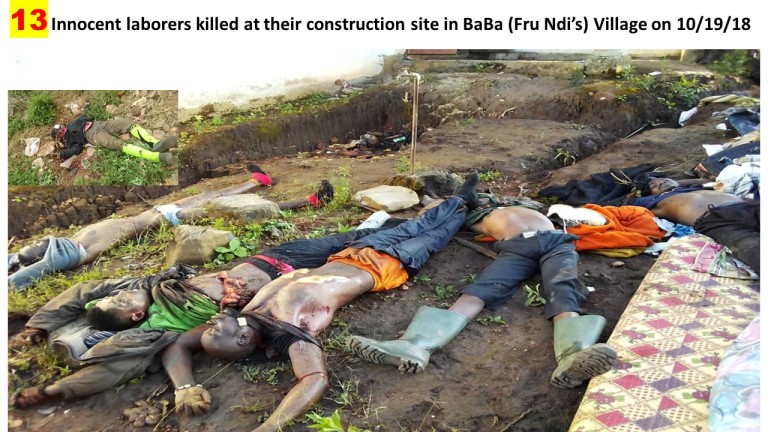 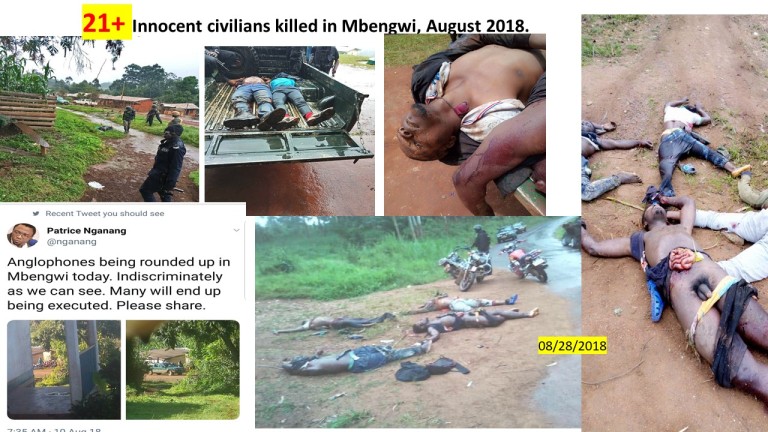 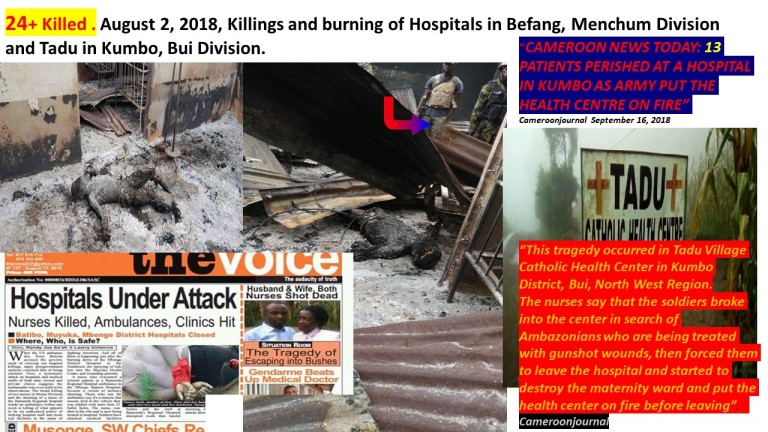 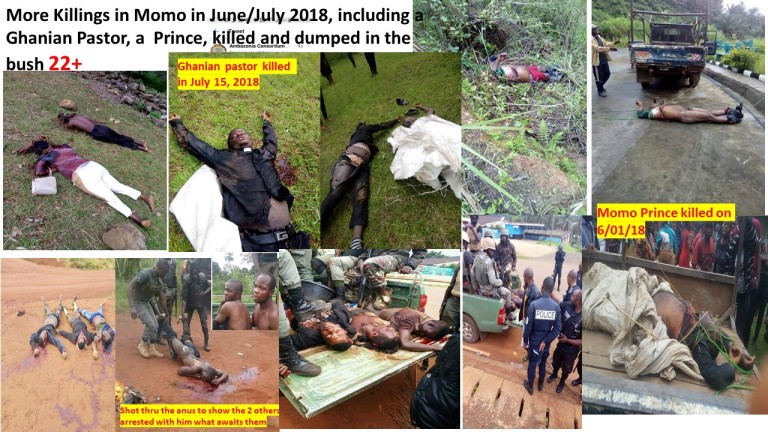 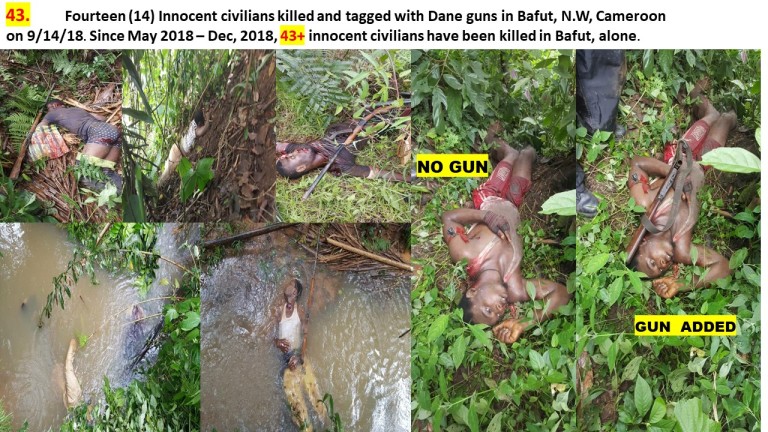 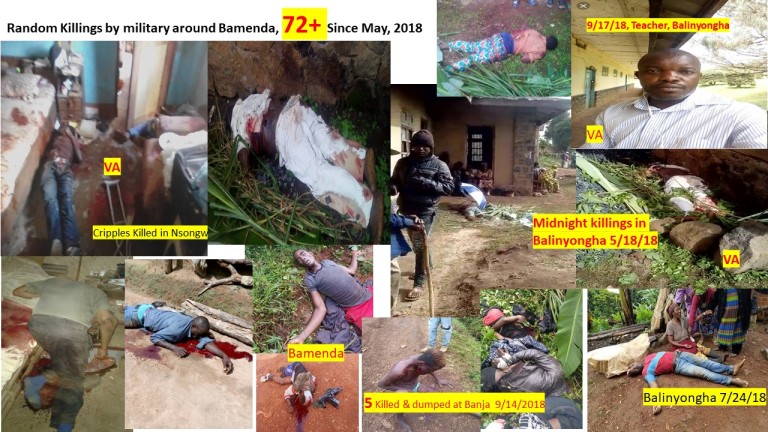 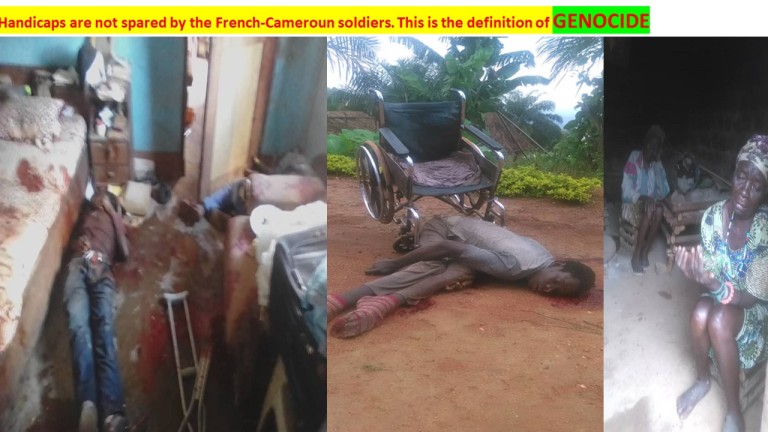 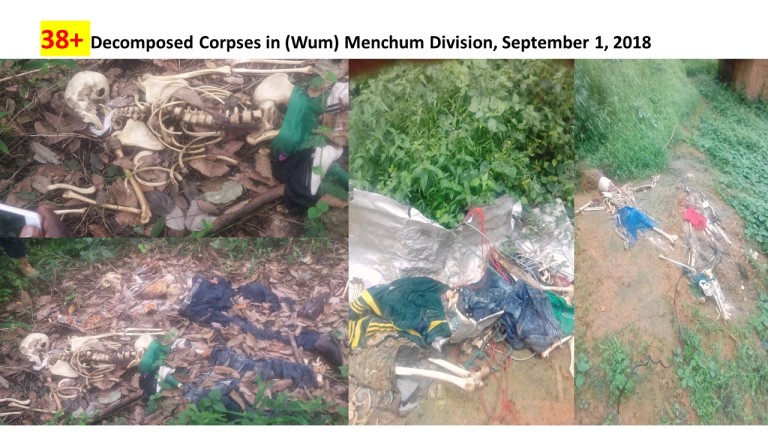 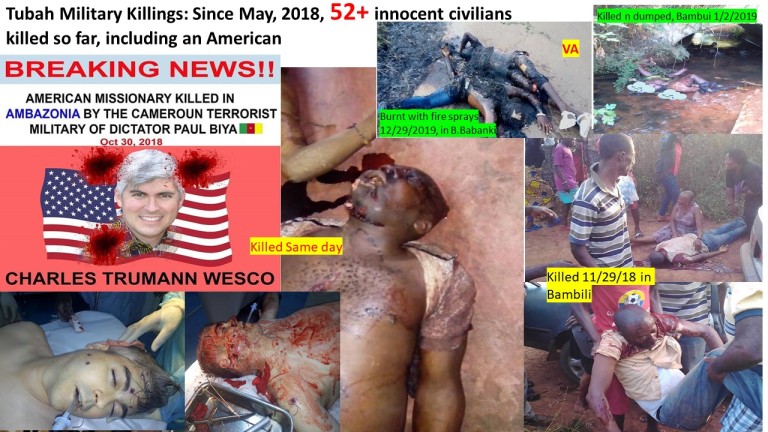 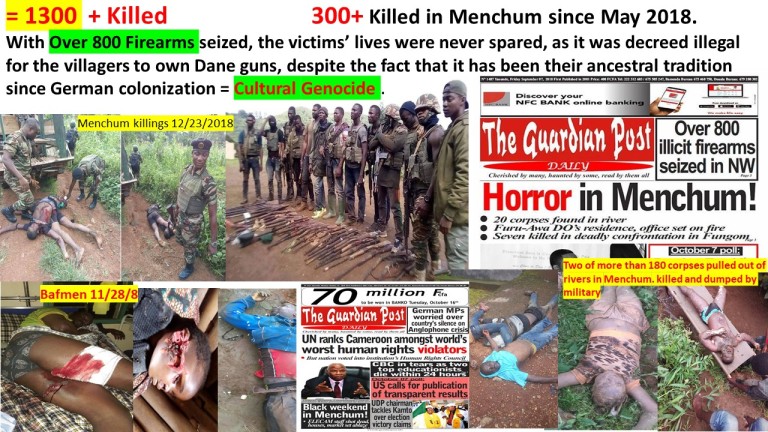 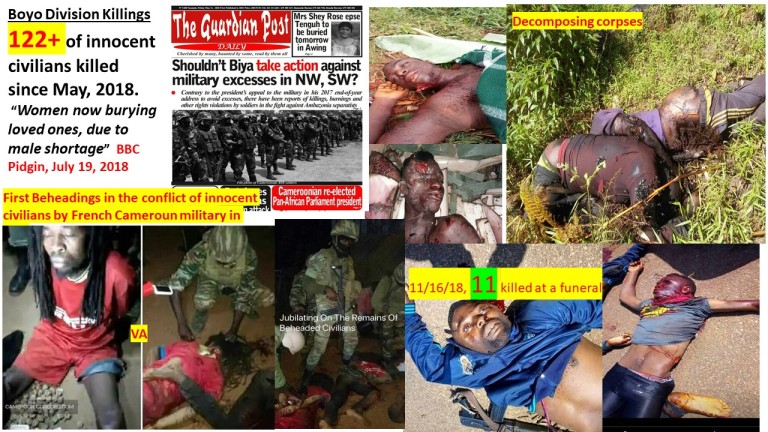 12 thoughts on “ICC Referral: The Governor who has Massacred more than 2600, scorched more than 80 communities, and rendered more than 240,000 homeless in Less than 220 days.”