“If you believe that Biya goes to an election to lose, then have your head examined.” These are the words of a Cameroonian activists, a former prison graduate of one of Cameroun’s dungeons in the political Capital Yaoundé. Arrested several times for calling for meaningful reforms in Cameroon, many like John (whose real names are concealed for security reasons), feel the presidential election of October 7, in Cameroon is a sham. Most of the candidates are without any political representation which creates a daunting governing process. Eighty-six-year-old Paul Biya, John says has already rigged the system by organizing senate elections, virtually short-circuiting the democratic calendar which is supposed to commence with legislative elections. Respecting the calendar would have given the presidential aspirants, most of whom are political neophytes an opportunity to build a truly organic governing process.

Senators in Cameroon are elected by indirect suffrage – by councilors, all of whom were at the end of their mandates when the senate elections were held last March 25, 2018. Of the 100 Senate seats, 70 are elected while the president appoints 30. Currently Biya’s ruling Cameroun Peoples’ Democratic Movement (CPDM), party has an overdose majority of 93 senators. To show his disdain for democracy and to have an indisputable direct influence on the activities of the body, Mr. Biya personally appointed the speaker of the Senate.

While the global media has focused on the elections and the violence rocking the country from the north, east and west, the eight aspirants challenging the elusive Paul Biya, have equally shied away from explaining how they intend to govern, as the country’s institutions are manned by staunch loyalists appointed by Mr. Biya. This view is shared by Peter, former journalist who covered elections in Cameroon, and now lives in Canada. “The so-called aspirants are enablers and “legitimizers” of the tyranny in Cameroun”. The world is talking about elections, with no regard for the conditions under which such elections will hold. Biya and his CPDM, Peter states have never won any elections in Cameroon, and will never win a free and fair election. The frustrated former journalist says he expects Mr. Biya to pay some foreign irrelevant personalities from some pseudo organizations to pronounce the elections to be free and fair. “How can they be free when he appoints every civil servant in Cameroun including governors, election officials right down to school principals?”. Such appointees Peter insists are under enormous pressure to secure victories in their various regions at all cost to maintain their positions.

While all the aspirants agree that it is time to retire the frail 86-year-old dictator, many have been vague on how they intend to democratically dismantle the tyrannical handiwork of Biya, glued in every facet of Cameroun’s life, for almost half a century, without becoming another dictator. One of the Aspirants Akere Muna of the Popular Front for Development Party (DPF), recently provided a window into this unanswered question. In a recent interview on Aljazeera, Cameroun’s “next dictator” to be was clear: “I will scrap the Senate, reformulate and infuse it maybe with an economic and social council that brings the expertise – the architects, and lawyers and engineers”. These promised unilateral executive actions by Mr. Akere Muna, which run afoul democratic principles signals the impending power-grab, unlikely to be relinquished by the new “miraculous” President of Cameroun. This according to Peter, practically lays the ground work for another dictator, who will thus have to also dissolve the CPDM-controlled parliament clogged with old Biya cronies.

Mr. Biya has had a firm grip on the country for almost half a century, altering the constitution to prolong his stay. The latest 1996 constitution is far from being fully implemented, but a provision about presidential term limits has been amended. In an unprecedented move following nationwide demonstrations in which Biya’s security killed scores, On 10 April 2008, Mr. Biya’s controlled national assembly overwhelmingly amended the constitution. Apart from removing presidential term limits, the amendment prescribe immunity from prosecution for any acts the octogenarian might have committed while in office. Despite these guarantees, Mr. Biya is far from relaxing his brutal grip on power.

The Anglophone Headache and Western Silence

While other leaders with corroborated human rights abuses, have received the ire of western powers, the west has surreptitiously ignored Mr. Biya’s atrocities so far committed in the English-speaking regions of Cameroon. According to the Center for Human Rights and Democracy in Africa (CHRDA), based in Buea, Cameroon, 106 villages have been destroyed by the Cameroun military. These accounts of villages burnt are corroborated by the BBC ( https://youtu.be/ct_SLnAGDuM )  and other western organizations. 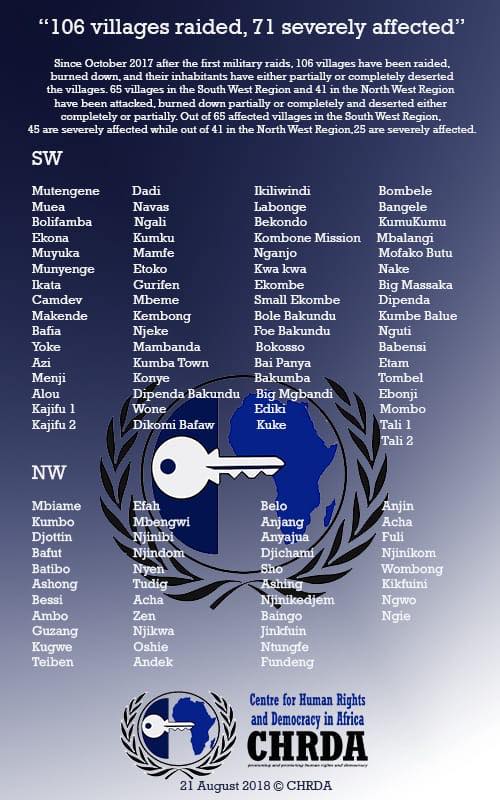 Commenting on western silence and their organizations’ use of the phrase “both sides”, in describing the atrocities in English-speaking Cameroon, one of the lawyers for jailed English-speaking leader Ayuk Tabe, Barrister Fru John Nsoh, reprimanded foreign media and organizations such as Amnesty, Human Rights Watch, Freedom House etc. for aloofness while Biya slaughtered innocent English-speaking citizens on October 22 and October 1st in 2017. For these organizations to have not been on the ground, and to be quoting government figures Barrister Fru, says is a disgrace. The killings he insisted began when government soldiers, some with helicopter gunships attacked peaceful protesters on September 22, and October 1st, 2017. “Where were the both sides that these organizations are quick to state now?”, He questions. While the number of civilians killed on that day will never be known until an independent unfettered investigation is conducted, Mr. Fru John Nsoh, insists that the only credible investigation about the killings for now is that of Joseph Wirba, parliamentarian of Cameroon’s main opposition the Social Democratic Front, who puts the number killed on those days at 122, and about 2000 intentionally shot to incapacitate. A victim in the town of Kumbo who received two gunshots on his legs says the military told him before the shots that, “I will see how you will use these legs to march again”.

Some of the maiming and killings on September 22 and October 1st, 2017

While English-speaking Cameroonians most of whom are victims of the ongoing killings have put the figure since November 2017, at more than 7000, the global community has continued to insist on an arbitrary figure around 400, without any evidence. Cameroun authorities have also vehemently refused any credible media or Human Rights Organizations from doing any independent investigation of the killings which are ongoing.

Some of the atrocities committed in English-Cameroon, by Soldiers loyal to President Biya, since 2016.

The English-speaking region of Cameroon obtained its autonomy from British-controlled Nigerian in 1953, and was self-governing until 1961, when a poorly-worded UNO plebiscite forcefully merged them into an independent French Cameroun. Persistent Complaints of marginalization and a return to the form of the union in 1961 by the English-speaking section that makes up about 20% of the population, have been ignored. The situation erupted again in late 2016 as a teachers and lawyers’ strike, but has since morphed into an armed conflict, between this former British territory, now called Ambazonia and the French territory or Republic of Cameroun. The central government and its military sent to quell the uprising are increasingly losing the countryside to these ragtag individuals who enjoy enormous support from the local population in the area. The separatists blame their plight on the British government for denying them the right to self-government in 1961, and remaining mum on the marginalization they face with the majority French government, whom they believe is engineered by France in a policy of assimilation.

The solution to the conflict the separatist who prefer to be called “Liberators” insist is a neutral negotiation or a referendum like Brexit or Scotxit to ask the wishes of the English-speaking people like they did in 1961. The majority French government of Paul Biya, has refused to discuss the form of the state, claiming without evidence that the armed groups are unpopular. For Peter and John, only the British government can initiate such a vote as the French government of Paul Biya, fears losing its source of wealth. For them, there is no doubt that the Former British territory will vote to leave French Cameroon in any vote about their future with French Cameroun. The English section of Cameroon provides more than 60% of the country’s GDP, with fertile oil deposits. The region also boasts of the most fertile fishing grounds in the world, surpassed only by Newfoundland.